The Power of “Thank You” 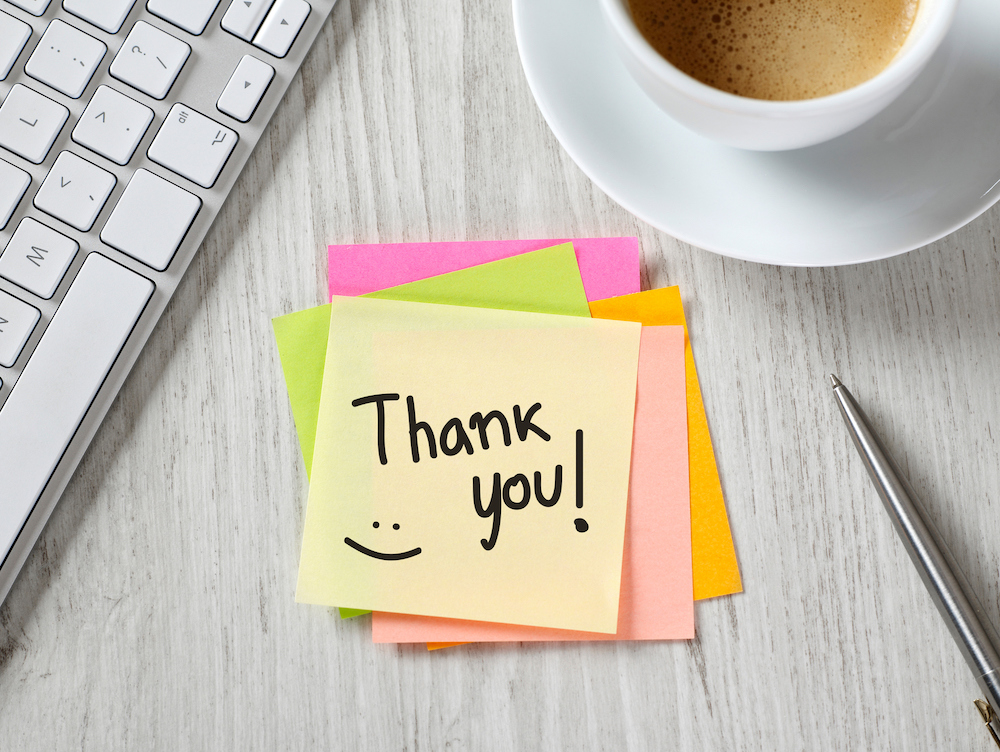 One of the first things most parents teach their children is to always say thank you. We do our best to instill the virtue of gratitude before we even teach the alphabet. Because it’s that important. We sign off with this expression in our email signatures. We consider it proper decorum to send a thank-you card when someone does something nice for us. Saying thank you seems like such a simple gesture, but the impact can be widespread. Especially when it comes from a leader, manager, or boss.

In a recent survey by Georgetown University of nearly 20,000 employees worldwide, respondents ranked respect as the most important leadership behavior. When you ask workers what matters most to them, feeling respected by superiors often tops the list. Similarly, an April 2016 study conducted by Harvard Business School found that workers are distressed when employers don’t express appreciation for their work and 39% of workers polled wanting to quit because they did not feel appreciated at work. Believe it or not, recognition is often more sought after from employees than a pay raise or benefits. When asked if they would work harder if their efforts were better appreciated, 65% of satisfied respondents said they would, according to a Globoforce study.

A new addition to our organization here at Smith & Wilkinson is Leadership Coaching, and one of the main focuses of Leadership Coaching is Ongoing Regard. What is Ongoing Regard? Ongoing Regard is more just than the act of saying thank you, it’s directly acknowledging the impact someone had on you or the company. Saying thank you strengthens the bonds between people and re-emphasizes the personal relationship. But a thank you can be even more powerful if it contains the language of ongoing regard and gives specific examples of how that person helped you. Whether written or spoken it can be transformative for both the sender and receiver.

The act of showing appreciation for you team not only creates a healthier work environment, but it will allow your employees to feel more comfortable when speaking with you about a problem or conflict. It creates Psychological Safety. Psychological safety, another area of emphasis during Leadership Coaching, is the belief that you won’t be punished when you make a mistake. When we are being given bad news, or being told we did something wrong, the brain actually processes this as a life-or-death threat. The amygdala, the alarm bell in the brain, ignites the fight-or-flight response. While that fight-or-flight reaction might save us in life-or-death situations, it blocks the strategic thinking we need when we are being told something negative. By creating an environment of psychological safety and practicing Ongoing Regard, your team is more likely to come to you when they are struggling and will feel less threatened when receiving feedback.

The hypothalamus, which controls basic bodily functions such as eating and sleeping, and dopamine, are heavily affected from feelings of gratitude. Alex Korb Ph.D writes, “Gratitude can have such a powerful impact on your life because it engages your brain in a virtuous cycle.” Moreover, these brain boosts can have substantial positive effects in the workplace and in the employee’s work/life balance. Showing gratitude can increase a person’s wellness, increase better sleep habits, increase metabolism and lessen stress. This directly impacts work results and employee interaction. With employee appreciation, you’re not only boosting performance and engagement, but the employee’s well-being and health.

When we work hard on something and don’t receive any positive feedback in return, it can be disheartening. There are a number of ways to show gratitude as a leader, whether you write a note or just stop an employee in the hall to give them a pat on the back. The best part of appreciation is that it’s free and doesn’t consume a lot of time. Anyone at any level can offer appreciation. It can be directed toward an employee, a colleague, or a boss. But when leaders get involved in the effort, a culture of appreciation spreads more quickly.